Photo courtesy of Toby Harriman by way of Architect Magazine

The new Transbay neighborhood is shaping up to be a vibrant and diverse corner of an already lively area of San Francisco.

According to the Project Development Plan, the project will usher in nearly 4,400 units of new housing with 1,200 of those units being permanently affordable. At the heart of this project is the Avery Tower and podium, a mixed-use project supplying 548 housing units, of which 150 are permanently affordable. Developed by Related California in conjunction with the Tenderloin Neighborhood Development Corporation, the tower is nearing is nearing completion with an expected move-in date in May. 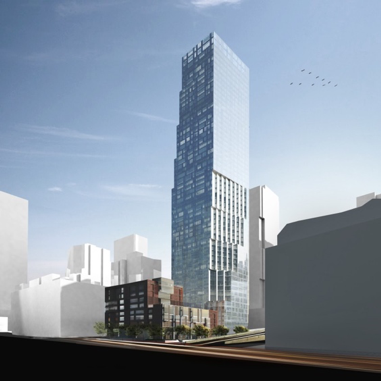 Photo of rendering courtesy of OMA via Architect Magazine

Y.A. studio is one of the architecture firms working on bringing this project to life. We partnered with HKS on the CDs and CA phases. Fougeron Architecture is the design architect for the podium and OMA are the architects for the tower. In addition to a major Construction Documents and Construction Administration role, Y.A. studio has acted as project architects and contributed to the architectural design of the retail spaces and affordable housing units, as well as interior design of the communal areas.

Our studio is proud to have been granted the ability to work on an affordable housing project of this magnitude. 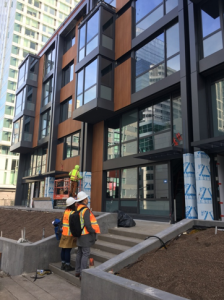 Paul Wang, Project Manager (Y.A. studio), and Karin Chen, Associate (Y.A. studio) stand in front of the project for which they were deeply involved in Construction Administration for Block 8.

There are no comments

This site uses Akismet to reduce spam. Learn how your comment data is processed.